Great Bustards are social birds usually living in small single sex flocks. However, in winter large groups of more than 380 birds may form in eastern Austria, with young birds from the previous year generally staying with the female flocks. These big winter gatherings, which can comprise an entire subpopulation, disperse again around March.

Its spectacular display is characteristic for the Great Bustard, probably the only exclusively polygamous bustard. In Austria the display rituals are performed each year mostly in April and May, usually at display sites which have been used for generations. In a matter of seconds displaying males transform themselves from steppe-coloured birds into almost entirely white "heaps of feathers" by turning around their plumage in such a way that the white undercoverts and the white undersides of primary and secondary flight feathers face upwards.

The normally well-camouflaged birds thus become highly conspicuous, and trampling and turning around slowly they attract females over great distances. Great Bustard display - white beacons appearing and disappearing in the open landscape in the twilight of dawn - is an unforgettable experience for the observer. Prior to mating, females approach the impressive male and circle around him. Mating is practically the only moment at which a female and a male Great Bustard seem to be interested in each other.

However, the displaying time is also a conflictual time. Conflicts usually start with a minutelong threatening position of the opponent. Immediately many juvenile Bustards rush closeby, and intervene actively in the fight. In most of the cases the fighting bustards just loose some feathers.

Female Great Bustards in Austria generally choose suitable nesting sites within 5 km of the display grounds, but occasionally more than 10 km away. They usually select breeding sites close to where they hatched themselves. Most females therefore breed in the centre of the population's breeding range, but others may breed many kilometres from it.

Once a female has decided on either of these possibilities she is likely to stick with it for the rest of her life. This "conservative" choice of nesting sites explains why individual sites are often used every year for decades. The consequence for Great Bustard conservation is that not only central breeding ranges but also outlying newly colonized sites must be protected, because they are likely to be used for a long time to come.

The nest itself is a shallow indentation on bare ground. In Austria most nests are located in cereal fields or on set-aside land. Clutches usually contain two eggs, rarely three. Females incubate the eggs for 25 - 27 days and are very easily disturbed, especially at the beginning of the incubation period. It does not take much to cause a female to leave and give up the clutch entirely. 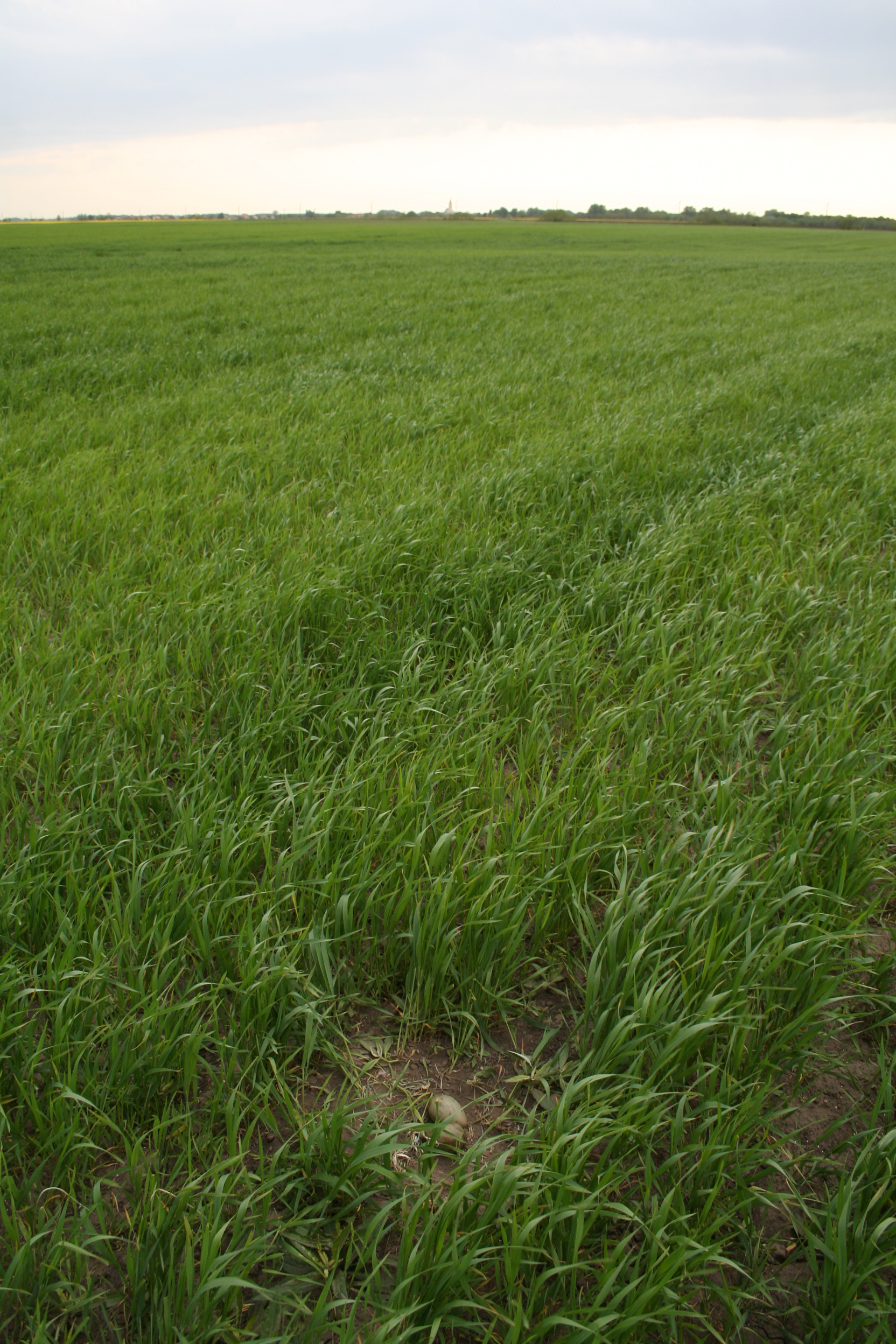 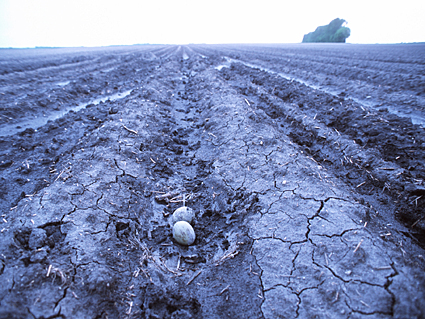 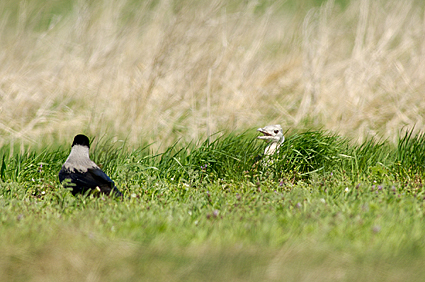 Newly hatched Great Bustard chicks weigh in at about 90 g. They are "precocial" / "nidifugous" nestlings, i.e. they are able to leave the nest and follow their mother immediately. During the first 2 - 3 weeks of their lives chicks do not feed independently but are supplied with food by the mother. For several weeks, chicks feed almost exclusively on insects. Grasshoppers and ground beetles, which abound in fallow land, are particularly important. Chick survival rates are closely dependent on the availability of this animal protein in the surroundings of the nest site, because nestlings rely on it for quick growth. The level of intensity of use of the landscape and hence the extent of food scarcity and disturbance have a direct impact on bustard chick mortality.

Juvenile Great Bustards start flying at 4 - 5 weeks. However, they continue to react to approaching danger by pressing themselves flat on the ground, so that cultivation and management measures at breeding sites may lead to casualties as late as July and August. Despite reaching their mother's size at the age of 10 - 12 weeks, juveniles usually stay with her until the next mating season.

Immature and adult Great Bustards predominantly feed on herbaceous vegetation, but are also adept at catching large insects and mice. In winter the leaves of rape seed and alfalfa are the main source of food in our latitudes.

The Great Bustard is one of the heaviest birds that is able to fly and is a powerful and enduring flyer. There are a number of reasons for Great Bustards to regularly fly locally or over larger distances, such as spontaneous flights, disturbance, seasonal change of preferred habitat, occ

asional visits to previously inhabited sites, flights between different subpopulations, "dismigration" (dispersive migration) and exceptionally harsh winters (Reiter, 2000). Flushed Great Bustards either fly off on large loops and return to the point of departure after several minutes, or they fly over longer distances to a different site. In exceptionally severe winters bustards are liable to being displaced over several hundred kilometres.

The fact that Great Bustards frequently fly and that their manoeuvrability is limited by their great weight and large wingspan of up to 2.30 m means that collision with power lines is a frequent and serious threat. There are numerous overhead powerlines in some bustard ranges, in surrounding areas, and on flight paths between different ranges. 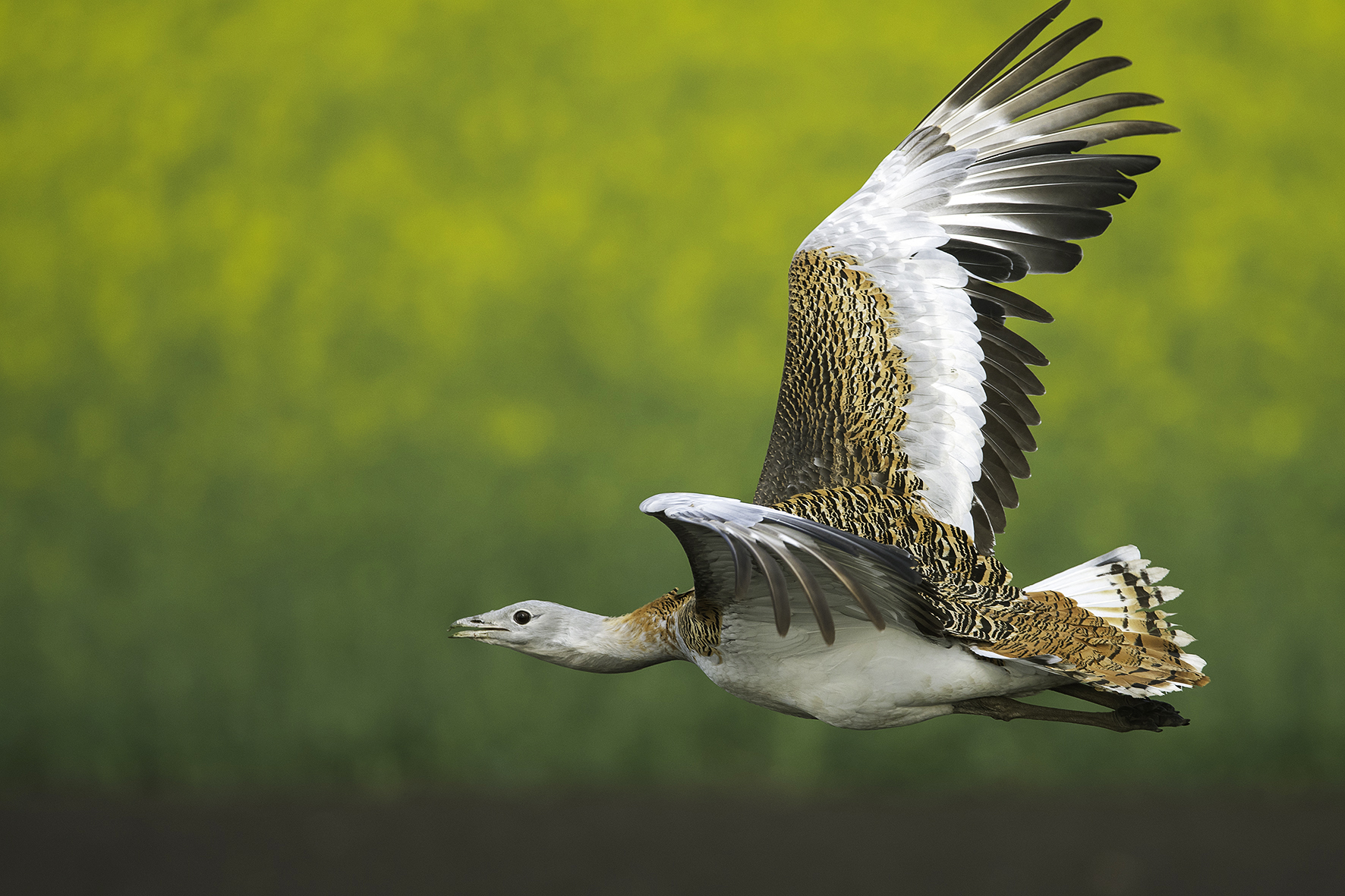 Optimum habitat for the Great Bustard in the central European region is open, unfragmented and extensively managed agricultural land mixed with plenty of fallow land, as supplied by set-aside schemes.

The Great Bustard (Otis tarda) originates in steppe areas. Following extensive medieval deforestation, the Great Bustard became a common sight in European agricultural areas. Bustards benefited greatly from the once common system of cultivating arable land in 3-year rotations which created a mosaic of cultivated and fallow land, as well as from the abundance of pastures.

Large-scale intensification and mechanisation of agricultural production from the middle of the 19th century onwards led to comprehensive changes in the ecological conditions of the agricultural landscape. Many plant and animal species including the Great Bustard saw their habitats destroyed. In Austria suitable Great Bustard habitat currently exists only inside protected areas with large dedicated "bustard conservation sites" and management adapted to the particular needs of bustards.

Undisturbed "bustard set-aside" areas with their diverse, well-structured vegetation and their abundance and diversity of invertebrates provide an ideal environment for nesting and parenting females. Similarly, cereal fields where the application of fertilizers and pesticides is banned during the breeding season are suitable sites.

In autumn and winter Great Bustards often use agricultural areas outside the breeding range for feeding and sleeping. The winter range, therefore, is generally larger than the breeding range. Apart from "bustard set-asides", rape seed fields are often frequented at this time of year, making them important resources in the winter range.

The total "home range" that a Great Bustard uses in the course of a year is therefore much larger than any of the breeding, late summer, autumn and winter ranges alone. A seasonal change of preferred habitat can be observed in all sub-populations of the west-pannonic population, i.e. the cross-border Austro-Hungarian-Slovak-Czech population.

For this reason, the Austrian agri-environment scheme ("Austrian programme for an environmentally appropriate, extensive and natural habitat friendly agriculture" (ÖPUL) supports the management of large areas of land as "bustard conservation sites". In 2022, more than 5,500 ha of land were and still are under these specially adapted agri-environment measures in order to provide suitable habitat for the critically endangered Great Bustard.

In Austria, there are currently five areas in the east of the country in which Great Bustards occur. Three of these are located in the province of Lower Austria, the "Western Weinviertel", the "Marchfeld" and the "Rauchenwarther Platte", and two in the province of Burgenland, the "Parndorfer Platte - Heideboden" and the "Hanság" (part of Lake Neusiedl National Park).

The "Western Weinviertel" bustard area consists of large parts of the SPA "Western Weinviertel" (AT1209000). All breeding and display sites (leks) as well as important spring, late summer, autumn and winter ranges are protected as Natura 2000 sites. The main current bustard range in this area is located northeast of the Manhartsberg on rolling hills in an agricultural area that is largely free of windbreakers and trees. It is situated in the "pannonic" climatic region on a plateau 240 - 315 m above sea level.

The "Marchfeld" bustard range comprises large tracts of the SPA "Sandboden und Praterterrasse" (AT1213V00). This Natura 2000 site covers all the main sites currently being frequented by Great Bustards in the Marchfeld area. All leks and breeding sites as well as important spring, late summer, autumn and winter ranges are protected as Natura 2000 sites. The main current bustard range in this area lies between 140 and 160 m above sea level.

Marchfeld is a plain of quarternary gravel deposits left behind by the changing courses of the Danube since the last ice age. It lies north of the present course of the Danube, between Vienna and the river March. The southeastern corner of this plain, near the confluence of March and Danube, was characterised by marshy terrain and reedbeds up until the middle of the 20th century due to high ground water levels and the floodplains of the Russbach, which used to meander extensively. The northern third of Marchfeld, however, the Gänserndorf Terrace, used to be so arid in the times before artificial irrigation as to allow only a very limited degree of agriculture. Several settlements had to be given up in the middle ages. In the northeast of Marchfeld, landscape features and soils shaped by migrating sand dunes have been preserved to this day. They have been planted with pine trees from the times of empress Maria Theresia on in order to secure them. The greates part of Marchfeld, however, has fertile black chernosem soil and has been under intensive cultivation since the 19th century, when drainage and fertilisation begun.

Parndorfer Platte is a plateau formed by a 30 m - high gravel terrace northeast of Lake Neusiedl and Seewinkel. Nowadays the striking south slope of the terrace, partly covered with loess, is mostly used for wine growing. On the plateau itself natural mixed oak forests and forest steppes, whose original character is still distantly preserved in the Zurndorf oak forest, have long since been replaced by open cultural landscapes typical for the pannonic region. Up until the last century, Parndorfer Platte was used for pasture, with extensive wood-pastures and interspersed woods and copses. Today it is predominantly arable land free of trees, with wind breakers criss-crossing it in the west and the motorway A4 and two high voltage power lines cutting through it in the south. At the northern edge the 220 km² plateau slopes down to the Leitha lowlands, a plain with meadows and remnants of flood plain forest between the rivers Leitha and Kleine Leitha.

The Heideboden natural area, a treeless plain of about 60 km² north of the Leitha lowlands makes up the border area between Hungary, Slovakia and Austria. It is an extension of the Little Hungarian Plain, stretching far towards the Hundsheim hills and the Vienna Basin. Like Parndorfer Platte it is almost entirely under agricultural use, the main difference being that irrigation here permits the cultivation of maize. The whole Parndorfer Platte and Heideboden landscape is typified by pannonic climate and is among the driest and hottest regions of Austria. Annual precipitation regularly falls below 500 mm, southeasterly winds bringing in hot and dry air in summer and continental cold air in winter.